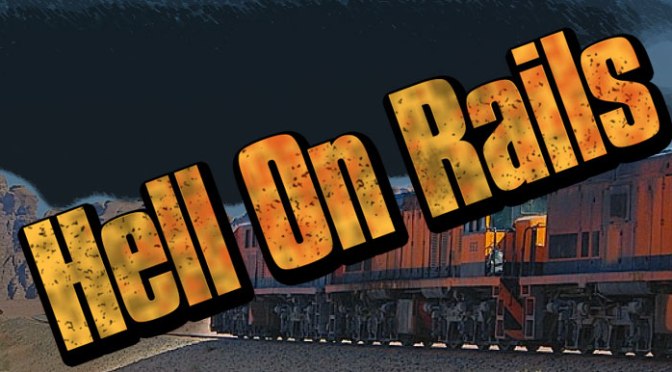 Nyko wasted no time dragging the trailer into the garage.  He attached a hose to the exhaust of the truck, ran it out the roll up door and closed it down.  There was a small gap at the bottom, but it was better than dying of carbon monoxide poisoning.

He worked quickly to load the two custom bikes onto the four-slot bike trailer.  When they were finished, he rolled his bike onto the trailer, attached it to the truck and drove it back to the warehouse.

Over the next four days, Jonas tore the scout truck’s engine down, ported and polished the head, and reassembled it.  On Thursday afternoon, it sat purring like a kitten in the garage.  Jonas’ head bent over a computer screen.

“How much longer do you need to run that thing,” called Brian, waiting for his turn with the generator so he could weld the last piece of armor plating on the cab.

“I’ll be done when it’s right.  I’m not willing to bet my life on a truck that isn’t perfect, and we don’t have the fuel to waste if it’s not running at peak efficiency,” yelled Jonas, reaching into the engine and to push the throttle arm.  The engine roared as he watched the wave crossing the screen.  “Three seventy five!  I love this ethanol shit,” he yelled with glee.  “This fucker’s gonna haul ass! I bet we’re pushing four hundred pounds-feet of torque!”

Jonas reached up and flipped the monitoring system off.  “You’re good, Brian.  I’m done.”  He climbed down off his stool, walked around the truck to turn it off, just as Nyko walked in.

Nyko smiled.  “Fantastic.  Want to come along for a test run?”

“Hell yeah!” shouted Jonas, pumping his fist.  “An hour in the air conditioned truck?  I’m all about it.”

“Good. Grab your stuff, and get us some lunch.”  Nyko lowered the tailgate of the truck and crossed the warehouse to a pair of loading ramps leaned against the wall.  He grabbed one, carried it back to the truck and laid its end on the truck’s tailgate.  A few minutes later, he roared into the warehouse on his bike, deftly rode it up the ramp and parked it in the back of the truck.

Nyko was just finishing strapping the bike upright in the back of the truck when Jonas returned carrying a backpack, a cooler, and Nyko’s holsters.

Jonas stopped when he saw Nyko’s bike in the back of the truck.  His face looked dejected. “Boss, I’m hurt! You don’t trust me?  This truck’s good for a hundred thousand miles!”

“I trust you with my life.  I don’t trust whatever is out there.  If the truck gets shot up, I want to have some way to get back.  Hoofing it across the desert in the early afternoon isn’t my idea of a good time.  Add in the fucking walking corpses and a shorty in tow and It’s more than I can handle.”  He grinned as he spoke.  “I figure, if we run into trouble I can put you in the saddle bag and let you shoot our way clear.”

Jonas tossed the cooler and his tool bag in the back of the truck and heaved the tailgate closed.  Nyko got in and cranked the truck while Jonas slid in the passenger seat.

“Let’s check out the rail suspension and run an hour or so down the line.  I don’t want to waste a lot of fuel.  An hour each way should give us a good feel for the tracks.  I want to get the train out tomorrow.  Full dress run.”

Nyko backed the truck out of the warehouse and put it in drive.  He eased the vehicle up over the curb, through the tall grass around the side of the building, and then angled the truck towards the tracks.  It took a little work, but after a few minutes, he was centered over the rails.

The rail chassis control screen was mounted to transmission hump.  An arm held the screen just in front of the radio.  Jonas pushed the power button.  The front and rear cameras displayed pictures of the tracks in front of them, along with alignment guides.  When the guides on the screen turned green, Jonas pushed the button to lower the rail chassis.  They felt the hydraulics drop, then the truck slid half an inch to the left as the rail wheels engaged the tracks.

“That’s much easier if you do it at a street crossing,” suggested Jonas.

“Easy is for suckers.  I needed to know how hard it was to get on and off the rails in the desert.”

Nyko dropped the truck into gear and eased up to thirty miles per hour.  “Let’s go see what’s past the bridge.”

Less than a mile outside the city, the sand started creeping over the rails.  Nyko immediately knew he was going to have to delay the trip.  Jonas saw his face and asked, “What’s up, Boss?”

“The sand is already starting to cover the rails.  We gotta get more equipment.  Somewhere in a depot around here is a device for pushing the sand back off the rails.  I don’t know what it is or how it works, but they have to have something.  This had to have been a routine maintenance thing, right?”

“I’m sure.  They probably had to do it every fuckin’ week.  How are we gonna find it?”

“If it was regular track maintenance, it doesn’t seem like it would be very far from the track, right?  Maybe if we follow the train tracks, we can find the garage where they stored all that kind of stuff.”

“Not just out for an afternoon drive anymore, eh?

“It never fucking ends.  I thought we were so close.  Nyko shook his head in disappointment.  “So fucking close.”

They continued using the rail chassis until the sand was covering the tracks.  Once it was up to the top of the rails, Nyko raised the chassis and continued forward on the tires.

Less than a mile later, the truck was stuck.  “We have to let the air out of the tires.  Low pressure tires will float on the sand better.”

“I’ll shovel, you lower the air pressure,” Nyko replied, turning the truck off.  They were stuck at the base of a small rise.

The biker grabbed the shovel out of the back and bent to shovel out the piles of sand in front and behind the back tire.

Nyko froze.  He knew the tone.  Seconds later, he heard an unfamiliar voice scream “I’m going to eat you like a meat popsicle!”

He dropped to his hands and knees and looked under the truck.  Six pairs of feet were running towards Jonas.

“Get under the truck,” Nyko said, pulling the handle on the side bin.  He pulled out Black Beatty, a long, black rifle with a two legs folded under the barrel.  He spread the legs and propped the gun on the top of the toolbox.

He flipped the covers off the scope, lined up a target, exhaled, and squeezed.  He worked the bolt, exhaled and squeezed.  Two more times he fired before the gun was empty and the marauders were at the truck.

“Blood, delicious blood!” one of the Marauders screamed, his voice cracking as he stopped and buried his face in the abdomen of his fallen comrade.  The last kept coming.

The marauder was wearing tattered gray sorts and what had once been a white tee shirt.  He had one shoe, an old Nike, the other foot had the remnants of a sock around his ankle.  The foot of the sock was long-since rotted away.  His face was covered with several layers of tattered, sun-bleached bandannas, and on top of his head he had a very cunning orange and white hat, the strings on the ear-flaps tied under his chin.

Nyko grabbed the shovel and brought it around in a huge overhead arc, smashing the spade into the head of the marauder.  He crumpled like a rag doll.

“All good, Jonas.  Get those tires aired down, the shots will bring more.”  Nyko redoubled his efforts to dig the wheels out.

Hell on Rails is a weekly serial, written by Kirk Allmond and posted free here on WhatZombiesFear.com.  If you’d like to check out any of my books, you can check my Amazon author page.