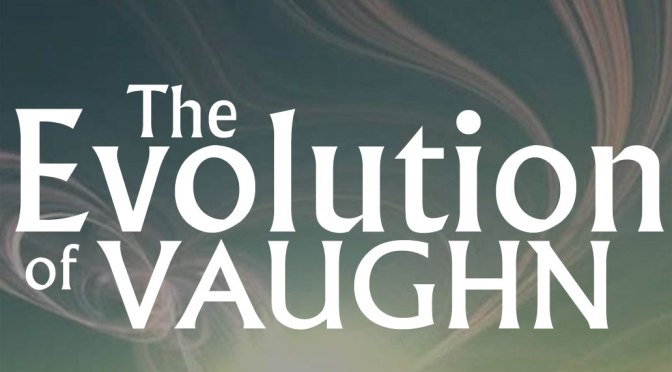 AUTHOR’S NOTE:  This book skips around in time a bit.  Not in a timey-wimey time-travel sort of way, but through flashbacks and Vaughn’s memories.  The heading at the top of the page tells you the year.  The “main” story happened in 432, this chapter, for example, takes place in 430.

Two years earlier, when Vaughn got word that his best friend Fresia’s father was dead, he set out that afternoon for Foger.  Matthew was sick, so Sarah stayed home with him.  She gave her husband strict orders to send Fre her love.  After the funeral, the pair walked a block over and two blocks up to a little bar called “Twinings.”  Vaughn slipped the bouncer at the door a few crench and he led them towards the back, past the stage where a Human girl danced, grinding on a pole to the bass-heavy music.  She peeled a tiny string-top off and tossed it to the side, shaking her breasts at Vaughn and Fresia as they passed.   “Hey, Fre,” she called.  “Who’s the hunk?”

Fresia smiled slightly as she looked at the dancer.  “Hey Skye. He’s an old war buddy,” she replied as she slipped into a booth.  The bartender arrived seconds later with two moges.  The thick, dark brown, malty beverages were their drink of choice.  “Thanks Bode,” she replied and took a long drink.

“He was.”  Her eyes were distant as she dwelled on his memory.  Vaughn didn’t bother pushing her for conversation.  Eventually, her eyes refocused on her friend.  “That’s kind of why I asked you here.  You’re the only one I knew to call.  Dad was murdered, Vaughn.  They called it an accident, but he was killed, I just know it.  He was in great shape, and had a physical two weeks ago.”

Vaughn took a long drink from his moge.  “That’s a big accusation.  Do you have something we can go on?  If you do we’ll find the bastard and I’ll skin him alive.”

Fresia took a long drink herself, draining her glass.  “When we find the bastard, I’m going to skin him alive.  Then I’ll apply dermal bandaging, and skin him again.  When I’m done with him, he’s going to wish I’d fed him to a heard of gnarg.

“Tell me what you know, Fre.”  Vaughn nodded to the bartender who brought another moge for Fresia.

“Dad was into something.  He told me he was going to do this one deal, and then he’d be out.  This one was going to set him up to retire.”

“I don’t have anything concrete, but I’m pretty sure it was worine.”

Vaughn suddenly knew why Fresia had chosen this bar.  The music made it impossible for anyone to eavesdrop.  “Shit, Fre.  What was he doing mixed up in worine? That shit is big time.  People die from just one small dose.  What the hell was he doing pushing?”

“I dunno, Vaughn.  I don’t even know for sure that’s what it was, but he was hanging out with a bunch of Geraldinian thugs.”

Vaughn took a sip of his moge and set the glass down on the table.  The girl over Fresia’s shoulder was working hard to get his attention in hopes that he’d slide a few crench into a lacy band on her thigh.  She was extraordinarily beautiful, but Sarah would never approve.  He tried not to look, but she was good at her job, and she was physically perfect.  He briefly wondered if she could carry on a conversation.

“Where can we find these guys?”  Vaughn asked, tearing himself away from the beautiful woman.

“They hang out at a club on the outside of town.  Skye dances there sometimes.  She got me in last night to check it out.  Small joint, front door has two bouncers.  Kitchen door leads to an alley.  Main room has a big bar, maybe fifteen tables, and there’s a back room.  I couldn’t get back there; Skye says that’s where they hold private parties.”

Vaughn pictured the place in his mind.  Since his mother passed away he didn’t ever come to this part of town when he was on Foger.  “What’s the name of the joint?”

“It’s a Human bar, taken over by Geraldinians.  They just showed up and muscled all the regulars out.  Called the Alley Cat.”

“What’s the plan? What do you need from me?”

“Skye got me a gig dancing there tonight.  I’m going to kill them all, but I won’t have anywhere to hide a weapon.  I’m worried I can’t take them all unarmed.”

Vaughn laughed.  “You’re going to be dancing? After our homecoming gala?”

“Fair enough,” he smiled and then asked, “How’s security? Am I going to be able to carry something in?”

Vaughn thought for a minute.  “How are we going to handle Empire Security?  They’ll be there in just a couple minutes.”

“Skye’s my backup on that.  She’ll say one of them grabbed me, I slapped him and things got rough.”

“There’s been a huge influx of incidents involving Geraldinians sexually assaulting Human women.  Ever since they took over the low-quarter, it’s like they have something to prove.  Bunch of macho assholes.”

Vaughn resigned himself.  Fresia was his best friend, and had been by his side since his third year at the Institute.  When he was named Captain of The Reetus, she was his only choice for first officer.  “I wish Hold was here.  Geraldinians are fucking tough bastards.”

Fre nodded.  “Me too, but he’s busy on Savye, he’s up to his ass in debt and the ruling council is breathing down his neck.  He can’t get away.”

“Anything else I need to know before this goes down tonight?”

Fre shook her head.  “I think that’s it.  Get in, bust heads, get information, and get out.”

“Alright, I need to run a few errands; I’ll head to The Alley Cat about twenty-six hundred?”  A Fogerian day ran for thirty hours.  The longer days and nights had significantly upset the circadian rhythm of early Humans.  These days, Humans were used to it, although their bodies never developed a need to sleep longer.

The pair stood up.  Vaughn hugged Fresia and said, “We’ll find out what happened and there will be justice.”

She looked at him squarely in the eyes.  “Thank you, Vaughn.  For everything.  I don’t know what I’d do without you.” As Fresia passed Skye, she paused, slipped a handful of crench into her garter.  Skye bent down and kissed her with a passion that surprised Vaughn.

When it was his turn to walk by, she shook her boobs at him.  He turned slightly red, slipped whatever bills he had in his pocket into her garter, and walked out, rubbing lipstick off of his cheek.

Vaughn headed straight for the central market.  He passed store after store, selling everything from gnarg steaks to hand-made tak bars, moge and harder liquors, flowers and transports.  Anything legal could be purchased there in the central market.  For those looking for less-than-legal items, as Vaughn was that afternoon, one just had to know where to look.

He buttoned his coat and slipped into the side door of Miss Autumn’s, one of Vaughn’s old haunts when he was a bachelor living on Foger.  The side door was reserved for special patrons.  Vaughn hoped that title was for life, because he hadn’t been a good customer for a number of years.  As he closed the door behind him, a high pitched voice called out to him.  “Vaughn! Honey, I’m so glad you’ve come home.  Finally decided to ditch that old ball and chain?”

“Hi, Misty,” said Vaughn, looking over at a beautiful blonde.  She was wearing a completely see-through bikini with tall heels and nothing else.  Eight years hadn’t changed her a bit.  She was sitting on a long sofa, with her legs crossed.  She kicked one leg innocently when Vaughn looked up.  “I’m still married.  Sarah’s doing well.  I have a son these days,” he said, smiling.

“Oh, Vaughn.  It’s a shame to see a man like you put out to pasture.”  Misty put one foot over on the couch and ran her hands down her body, lingering between her legs.  “Almost ten years I’ve been waiting for you to come back.  No one makes me scream like you.”

Vaughn shook his head.  “I got everything I need at home.”

“Why don’t you bring her along next time you come?”  Misty ran her hands up to her breasts and squeezed them.  “I play well with others.”

“That’s great, but I don’t.  It’s been good catching up, baby, but is Mikey still downstairs? I need to have a talk with him.”

“Yeah, fine, whatever,” said Misty, standing up.  As she walked past Vaughn to a small desk on the far side of the room, her skin went from milky white to dark green.  Her legs and arms lengthened, and a tail peeked out from her backside and waved at him.  She pushed a button on the desk, causing a door to open right beside Vaughn.

Her voice was much lower this time, as she said, “Last chance.  I can look just like her if it makes you feel any better.”

Vaughn nodded his head towards her and stepped down the stairs.

Halfway down he heard a voice call up, “Vaughn fucking Troupe.  What brings a badass motherfucker like you to my little hole in the world?”

“Mikey,” said Vaughn, stepping out into the underground shop.  “It’s good to see you man.”

Mikey was less than a meter in height and covered in shaggy green and brown fur.  He moved with deadly grace, in contradiction to his comical exterior.

“What brings you down?”

Vaughn held his empty hands out.  “I’m in a spot.  Some shit going down tonight and I could use something concealable that can even the odds.  Gotta get past a couple door guys.”

“Must be something big if you’re looking for a force multiplier.”  He held up his hands to stop Vaughn, who wasn’t going to say anything anyway.  “I don’t want to know. I have enough problems with the ES as it is.  I got just the thing for you, check it.”

Mikey disappeared behind the counter.  It sounded like he was throwing pots and pans, guns, knives, sticks, and batons aside.  When he reemerged, he was triumphantly holding a crench.

“Look at this son of a bitch.  I swear The Emperor, may he guide us safely through, would take this note himself.  But… you pull just right… and a little twist.” Mikey fumbled with the note for a second. “Hold on, it’s something like this.”  He fumbled with the note a little more before it tore in half.  “Alright… That was a real crench.  But hang on.  I got more shit.”  Mikey ran off to the back of the store.

Vaughn passed the time looking at the high-end plasma rifles hanging on pegs on the wall.  Everything on display was legal to sell, although some of Mikeys sources were slightly less than reputable.  Finally, the small man bounded out of the back room, backflipped off a Human size chair and landed in front of Vaughn holding up a ring.

“Can you bring me half a gram next time you’re in town?”  Mikey looked up at Vaughn.  His eyes were impossibly big.

“Half-gram?  Mikey… I’d take an ass whupping for a half-gram.  I’ll bring you a fifth.”

“Make it a quarter gram and we have a deal.”  Mikey reached up to shake Vaughn’s hand.

Vaughn looked down at his old friend.  “Fine,” he said.  “One quarter gram.”  The pair shook hands to seal the deal, and then Vaughn headed back to the ship to find some way to pass the time.

Please consider purchasing The Evolution of Vaughn on Amazon.  It’s $2.99.  That few bucks goes to supporting me, and I appreciate that more than I could ever tell you.