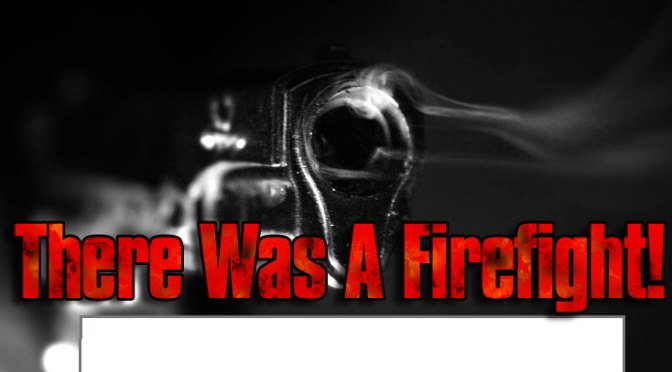 Hell on Rails is completely free.  No registration, no nothing.  All I ask is that once a week or so  you vote for the story on Top Web Fiction.  The link opens in a new window, and takes about twenty seconds to fill out a captcha and click vote.

The trip to Henderson Veterinary was uneventful.  Andy pulled up in front of the vet’s office and killed the engine on the buggy.

“Aww, baby, tell me they didn’t hurt you,” Brian said as lept out to inspect their buggy for any damage.

Andy knelt at the front door and put his flashlight in his mouth.  He slid the key he found before they left into the lock and applied a slight pressure, trying to turn it.  Then he tapped the back of the key with his flashlight.  In less than a minute he had the bolt unlocked, and the door open.

“How’s she lookin’?” Andy called back to Brian.

“Ain’t a scratch on her.  I don’t think they fired a shot, dumb sons of bitches never even knew what hit ‘em.”

Brian grabbed an empty backpack out of the back of the dune buggy, pulled a small flashlight out of a pouch on his belt, and he and Brian entered the office.  “Don’t look like nobody’s been in here.  Let’s grab some shit and go.  I wanna get back and finish them fuckers off.”

The pair loaded up the bag, plus everything they could carry and headed out.  Andy reached the door open as Brian was coming up the hall.  Tiny specks of light lit up the floor through the holes in the shuttered blinds.  Brian split them with his fingers to see the headlights of a pair of trucks shining in the front of the building.

Andy moved with incredible speed, diving behind a couch that was backed up to the outside wall.  Brian dove behind the reception desk and hoped none of them had high caliber rifles.

The second after the door moved, bullets flew.  The front windows shattered, spewing glass and debris all over the inside of the office.  The shades were torn down, allowing moonlight to filter into the room.  Andy and Brian lay curled up in the fetal position, butt and feet towards the incoming bullets, protecting their heads and core.  Both were well trained.

“Wait for them to come in,” Brian shout-whispered.  The hail of led stopped and Brian, quieter this time whispered, “You shot?”  Andy shook his head.

Brian un-holstered the pistol at his waist, and saw Andy do the same.  “Wait as long as you can,” said Andy.

“We got ‘em, boys!” yelled the first man.  The two friends heard a cheer from outside.

The four marauders split into pairs, one heading for Andy and the other for Brian.  Almost simultaneously, the marauders poked Brian and Andy with the barrels of their rifles.  Both men quickly rolled over and fired twice, killing all four marauders.

Andy stood up and looked at Brian before yelling in a perfect impression of the marauder, “Double tapped those motherfuckers.  Come on in boys, let’s clear this place out.”

Brian and Andy backed down the hall and waited.  The remaining men poured through the door into the moonlit lobby and were cut down where they stood.

Less than a minute later, the entire office was full of gun smoke.  The smell of blood and burned powder filled their noses.  Brian let out a low, “Fucccccccck you, bitches!”

Andy ran up and kicked one of the dead men.  “You don’t fuck with us!  We’ll lay you motherfucking sons of bitches dick in the motherfucking dirt!”

Outside, one remaining marauder ran off, jumped over a concrete wall into the back yard of one of the vacant houses and kept running.

Brian and Andy loaded the supplies into the buggy, along with everything valuable they could scavenge from the dead marauders.  One of them had a decent pair of boots, another had a leather jacket.  Andy started it up, while Brian headed towards the best looking of the two marauder trucks.

“Let’s go finish ‘em off.  Wonder if they left anyone back there?”

“Probably not.  But we gotta be careful anyway.  They surprised us once,” replied Brian.

“Grab the keys outta that other truck. We’ll come back for it later,” called Andy.

The marauder barn was, in fact, empty.  The two parked their vehicles and cleared the building before loading up a few useful items .  The marauders had food, water, a massive supply of ammunition, and the barn was a treasure trove of tools.

“We ain’t never gonna get all this shit back to Nykos.  It’s gonna take us a dozen trips.”

“Nyko came here for that track plow, right? To get all the sand off the tracks?  What if we use that to pull one of these boxcars?”

“We gotta get these meds to Nyko though.  We should drive home, then we can come back with some help to load it all up,” said Andy.

I like the way you think, brother-man,” replied Brain.

When they pulled into the garage it was nearly seven o’clock.  Charlotte came striding through the warehouse to meet them.  “Where have you been?  Andy, you were supposed to be on the door an hour ago.”

“I’m sorry, Charlie,” said Andy.  “We went to get Nyko some antibiotics, and ran into a little trouble.”

“We got a bunch of medicine though,” said Brian cheerfully.

“You should have let me know where you were going.  Not only were we short staffed, which I could have covered if I’d known, I was worried about you.”

“We’re sorry,” the pair intoned together.

“Andy found a book in the vet’s office.  It said gut wounds need some C –E – F antibiotics.” Brian spelled out the letters.  “We grabbed everything that started with C-E-F and everything that ended with ‘cillin.”

When they got up to Nyko’s room, he was awake.  Sweat beads dotted his forehead.  “Hey, Charlie, boys.” He said weakly.  “What happened?”

“Your intestine was ruptured.  I sewed you up.  You’ve been asleep for almost twelve hours.”  She laid her hand on his forehead, he was burning up.

“You have a fever, which tells me you have an infection.  The boys just raided a vet’s office and brought you a bunch of medicine.  I’m going to change out your IV now,” she said.  Brian and Andy were impressed by her authority.

“Thanks, Charlie,” Nyko said.  He smiled up at her.

“Boss, me an’ Andy here wiped all them fuckers out.  We checked out that barn, it’s got everything we need.  We just needed to get these meds to you before we loaded it all up and cleared our way back here.”

“Nice work, fellas.  Thanks for getting me all fixed up.  I need to chat with Charlie now.  Can you go cover the saloon for a few minutes?”

“Sure thing, boss.”  Andy and Brian grinned from ear to ear as they left.